The Story of How I Got 1.7 Million Visitors Without Paying a Cent

If you know how to use WordPress, then you can do this too.

It all started when I got this DM on Twitter from Noah Kagan: Like everyone else, usually I would pump out a new piece of content every week and I was lucky if I got a couple hundred readers. Every week I would work my ass off, most of the time getting no where.

I had just written a new article for my agency blog (about HubSpot) to try and attract business owners who liked HubSpot.

Except this time I tried a new technique that a mentor told me about.

AND BOY DID IT WORK!

Just look at who started sharing and recommending my article:

BTW, I did this with NO EMAIL LIST (and I'm not a celebrity).

This article worked so well, even the CMO of HubSpot reached out to me to discuss how I could help them with marketing.

I thought maybe I had just gotten “lucky” with this one piece of content.

So I was determined to make my next piece of content for Noah at Sumo/AppSumo even better.

I researched and wrote the article, then Noah edited for accuracy.

I then applied the exact same technique from before to Noah’s article as I did with the HubSpot one.

The headline for this one was "8 Marketing Ideas from Inside a $50 Million Startup."

Here's how the promotion stats breakdown:

After 30 days I'd generated 28,292 website visitors to this ONE article on Noah's blog!

Here's a screenshot of his Google Analytics account to prove it: Noah was so happy with my results, he made me an offer I couldn't refuse:

The same method I'm telling you about today. 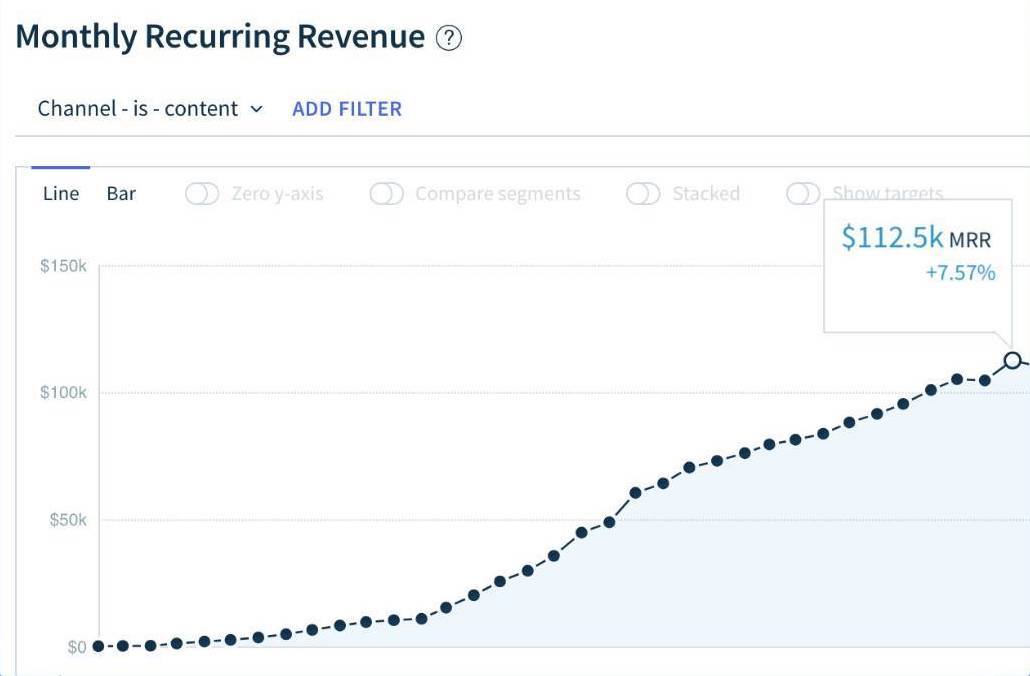 You might be thinking "the trick" is about SEO, but it's not.

We didn't beg for backlinks or optimize our LSI.

Although, the cool part is that SEO is a natural side effect of what I'm doing.

What am I doing?

If you're hungry for a simple method that gets lots of clicks without SEO or without paying for clicks, then keep reading.

But first I have a confession:

I actually started out as a paid traffic guy. That original article was to attract companies who wanted me to drive paid traffic. Then after I saw how much free traffic I was getting – Well, let's just say I rarely login to FB ads anymore.

Let me ask you a question:

Is Facebook still changing the rules every week? And still shutting down accounts? Is Google still charging over $1 per click?

I'm not saying I NEVER use paid ads, just saying I don't need to pay for clicks anymore.

What I never understood about paid ads…

Why Do Ad Networks Make It So Hard?

Does it even make sense why ad networks make it so hard to pay them for clicks.  Shouldn't they make it easier, not harder???

You almost need a college degree to figure out Google Ads.

Then there's all the rules:

Ad networks decide what headlines you can use. They decide they don't like your squeeze page.

It feels like ad networks have more rules than a library.

Even worse, they add new rules almost every week! It's almost like everything that works good – they decide to ban it.

Which means you almost have to re-learn how to do marketing their way. You're forever at their mercy.

Then, if you get a great paid campaign going it might get shut down overnight. Sometimes you get shut down even if their own ad reviewers disapprove something by mistake.

Worst of all – YOU – have to prove why it was THEIR mistake.

That's if you're lucky enough to talk to anyone. God knows they make it hard to contact customer support.

I found another way, and thank god I did.

Because of My New Traffic Skills, I Now Get To Do Awesome Stuff Like Hang Out In Jamaica Before I tell you what I do, let me share how I stumbled onto my method. First of all, just a couple years ago I was selling snow cones in Australia.

I was not a digital marketing expert. I was a break-dancing Aussie who sold carnival treats.

My claim to fame back home was selling over $1 million dollars worth of snow cones and donating over $100,000 of it back to kids sports clubs.

And then I met Justin Brooke, he's a bonafide digital marketing expert.

He has 13 years of experience, spent tens of millions on ads, and has thousands of customers.

He was teaching me how to start an online ad agency.

I told you I used to be a paid traffic guy!

Then Justin showed me a strategic way of doing content marketing. He was the mentor who gave me the technique that went viral.

A method that wasn't SEO and didn't need paid clicks either.

He was showing me this, because it's how he got clients. He was teaching me how to get clients too.

And then the clicks came flooding in.

And I wasn't paying a single cent for them.

From my first try, this method was… explosive.

This wasn't just some fluke viral article that I wrote one time and got lucky.

This was over a whole year's time with a small bunch of articles. Which for the most part I didn't even write, I just researched.

You will be able to repeat my success with this content marketing method over and over.

It's reliable, consistent, free, and Google can't take it away!

It's working so well, that investors, CEOs, and CMOs are reaching out to me asking to do what I do for them:

What Are You Doing That Works So Well?

Ok, let me explain what I did:

Frankly, I do almost all the same stuff that paid traffic guys do, except for the paying for clicks part.

I still research my target customer.

You have to know your target. Without this it's like trying to navigate in a new city with no map.

The BIGGEST differences are:

You Might Be Thinking What I Do Is SEO, But That's Not What I Do…

If you want to rank for keywords organically, then this works great without much effort.

SEO is far too difficult, competitive, and still puts you at the mercy from getting all your traffic taken away.

The only company who changes their rules more than Facebook, is Google!

Then how does it rank organically?

Because my method still gets you a lot of shares, clicks, backlinks, and time on page.

It does all that as a side effect.

Google loves all those things. They will rank your content favorably WITHOUT having to do "SEO."

The organic (SEO) traffic you'll get is a nice side benefit.

You'll get much more traffic from other sources though.

And you won't be sitting around waiting for the Google gods to bless your page with #1 rankings.

If you follow exactly as I say, then you'll get a majority of your clicks within the first three days.

Clicks Are Nice, But Did They Convert?

But if we look at all time, it's over a quarter million emails collected!

So yeah… It converts.

But what about sales?

The little blue numbers are how many new customers came in every quarter:

I'm just an ex-snow cone seller from Australia, if I can get 1,000 customers with this, so can you.

What Would 1,000 Recurring Customers Do For You?

If you sell SaaS products or membership sites:

Or maybe you sell coaching/consulting instead:

Or maybe you sell digital/physical products instead:

In every scenario, you'd definitely make back a lot more than the cost of buying my course today.

Even if you were at the lowest end, you'd make back your investment hundreds of times over. I've documented everything I do that works (and continues to work).

Content Marketing Masters is more than a course, it's a full content marketing system. You can take it for yourself, or plug in a team member.

Here's what you'll learn inside…

Stage 1 (White Belt): For new businesses with no list, no brand name in the market, and a very small budget of $10/day.

Stage 2 (Blue Belt): For small businesses that have been around. With a small list, a little brand recognition, and around a $100 daily budget.

Stage 3 (Black Belt): For established businesses with decent sized lists, a team, and over $10,000 per month budget.

Plus, you'll get my instant delegation kit...

You don't want to be doing all the grunt work.

I'll show you how to rapidly replace yourself with my instant delegation kit. Use these checklists, spreadsheets, and swipes to get your team producing results for you.

Inside you're going to get...

How Much Does It Cost To Buy Content Marketing Masters Today?

With licensing to one company at a time, I could charge $10,000 since this is a plug-and-play system.

$10,000 would be a bargain for the amount of traffic, leads, and sales my method produces.

I built the content marketing machine for Sumo.com doing exactly what I teach in this course. And my boss would think $10,000 is a great price compared to what he paid me.

I don't want to be doing phone sales and meetings to license this out though.

Instead I considered consulting with a handful of companies on the method for $10,000/mo.

I could consult with five companies a year and do pretty well.

I felt like $10,000 puts it out of the hands of people like myself when I first started though.

I'm committed to making this the best course on scaling a business with content that converts visitors into customers.

I've already updated two of the lessons this year.

Even if all you sell is a $100 product, you'd only need to sell 60 of them to make your money back. And I've already shown you how this method generated over 1,000 customers for us.

If You Want To Scale Your Traffic, Then Join Content Marketing Masters Today!

I Even Offer You Three Guarantee's

Money Back Guarantee: I know you'll love our products because our customers write in telling us exactly that every day. But just in case, we have a 30 day money back guarantee. Simply send an email to our support within 30 days of receipt, and your entire purchase price will be promptly refunded.

Support Guarantee: When you buy Content Marketing Masters, your purchase comes with premium support. Our average response time is 4hrs and 26 minutes (during business hours). With 20% of our emails being responded to within 15 minutes. And we constantly devote more resources to getting that number lower each month.

Freshness Guarantee: Content Marketing Masters comes with the always updated guarantee. Every month we review courses lessons for any outdated content. If something has changed or becomes outdated, I make a fresh lesson to keep it up to date. When you buy Content Marketing Masters, you'll never be left with old information again. You pay only once, and the product gets better each month. Where else can you find that kind of guarantee?

"I got over 4000 visitors to my site and then retargeted them with a case study of my services. Got two clients out of it just like that! People that come to me after reading that article are so pre-qualified it's unbelievable! Thanks man... you are my top resource for content marketing. "
- Alex Fedotoff

"As of 3:45 today, I have 19 new orders and 610 visits from the article - not to mention a few questions about wholesale, international shipping, and a few bloggers who are interested in writing about my company and product too!" - Lindsay McCormick